Karaman is a city which produces 3 times of the electricity it consumes. Karaman has a considerable advantage in wind and solar renewable energy resources. In addition, Karaman, with its hydroelectric power plants and coal potential, is a candidate city to be the energy capital of the future.

In Karaman there are 30 facilities with established installed power of 696 MW and the production is largely based on Hydroelectric Power Plants (585,79 MW).  Ermenek Dam (302,4 MW) built on Ermenek River contributes significantly to the installed capacity.

The Ermenek Dam which is in the Karaman city is one of the most important and largest dam in Turkey and World.It is situated in the Goksu Valley and it’s height is equal to the 80-story skyscraper. The dam is the 2nd highest dam in our country with 218 meters high from the foundation.

Ermenek Dam and HEPP can meet all electrical energy needs (such as housing, industry, metro transportation, official flat, environmental lighting) which is needed in the daily life of 236.687 people with an average of    859.647.586 kilowatt-hours of electricity generation. Ermenek Dam and HEPP produces electricity that can meet the electricity energy demand of 287.796 houses only when the residential electricity consumption is taken into consideration.

Karaman is located on the slope of the climate transition and on the slope of the Taurus Mountains. That’s why there is a potential of wind energy especially in the mountainous areas. There is the possibility of generating electricity from wind energy mainly  in the Karaman center  and in the Ermenek, Başyayla and Sarıveliler districts.The total potential for Karaman in this regard is around 1.000 MW.

Also in terms of coal potential; The 1.8 billion tons of lignite coal potential has been identified in the area between  Konya Karapınar district and Karaman Ayrancı district. This lignite potential is one of Turkey's largest coal reserve.

Karaman is the province with the highest GSR and sunshine duration in Turkey. Karaman is in the 1st place in our country in terms of Solar Energy potential.

Karaman is one of the most prominent region considering the its potential and current situation in solar energy sector. When evaluated together with the neighbour provinces, Karaman has significant advantages in terms of supporting these solar investments due to the fact that the TR52 region where there are many companies operating in the solar energy sector.

And It should be emphasized that, the area of ​​1.628 hectares in Karaman Central District was registered as “Karaman Energy Specialized Industrial Zone'' is in 2017.

You can use the following documents to learn more about energy in Karaman.

Energy Potential of the Region_Brochure_HighQuality
VIEW 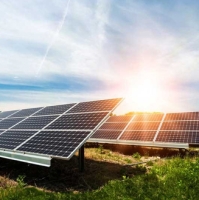