The northern part of the Karaman Province is covered with steppe plants and the southern part is covered with forest. 2/3 of the land is mountainous. The city center is located in the plain, just south of the Taurus extension.

It is a fruit production center in terms of fruit production and especially apple production. Apple is one of the most important agricultural products of Karaman. Karaman is among the top 3 cities in apple production, although its ranking changes every year according to climatic conditions. Similarly, it ranks first in Turkey with the number of certified apple trees.

Strongly existing agricultural sector in Karaman Province; has contributed to the development of the food sector, food machinery and agricultural machinery sectors in the region. There is a fruit juice processing facility with large capacity in Karaman.It is foreseen that new fruit juice processing facilities can be opened due to the fact that the fruit sector is widespread in the region.

In Karaman where it’s area consist of 21% of the land is composed of pasture and meadow areas livestock sector is an important sector. While bovine animals are feeded in the plains, small cattle breeding is carried out in the mountainous regions.
There are 15 milk facilities which 3 of them with large capacity in the region.

According to TUIK (Turkish Statistical Institute) data for 2021, animal stock and honey production in Karaman are as follows: 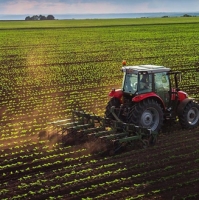